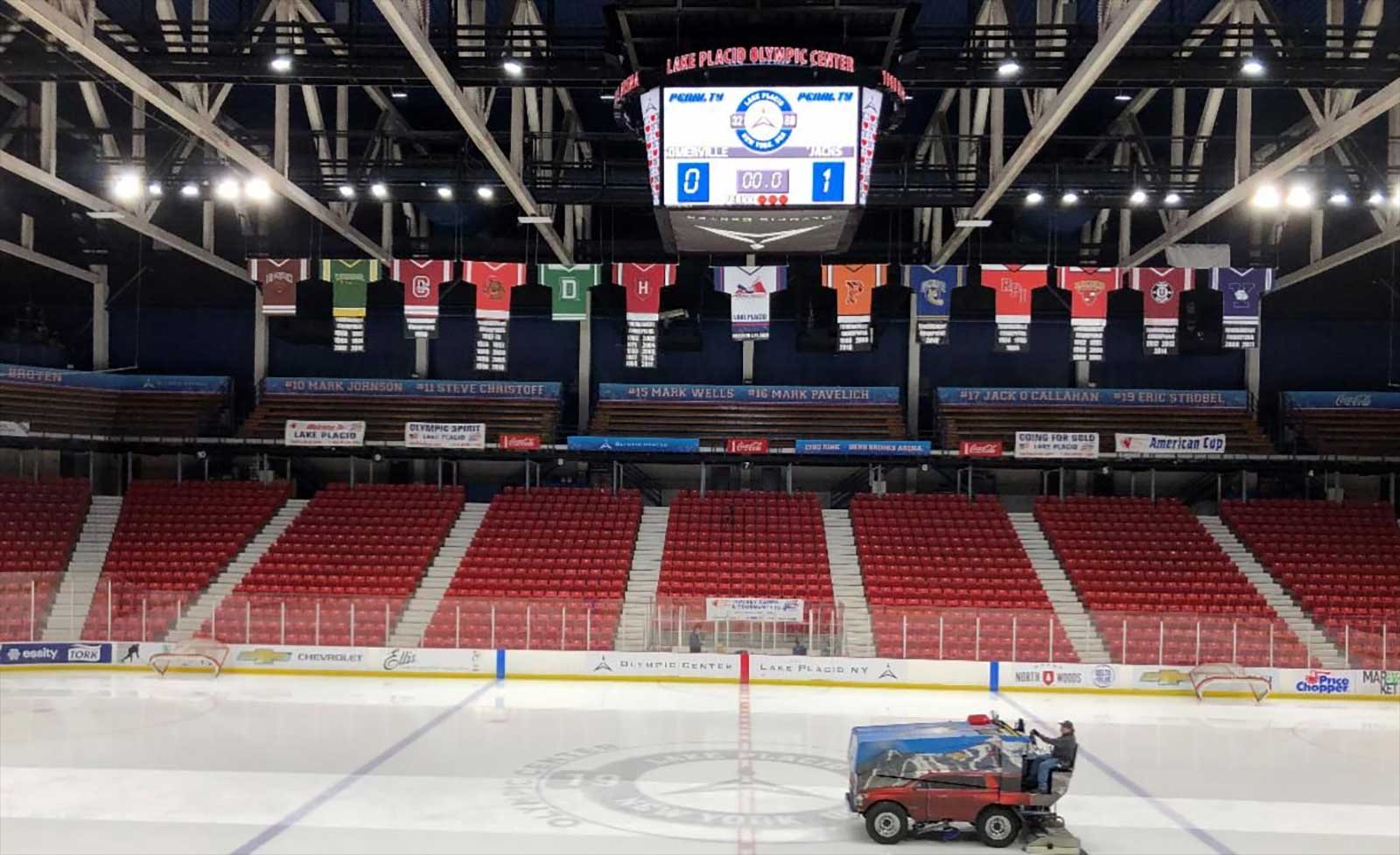 Drive west until you reach the end of the Mass Pike and turn right…well, north; many miles to go despite having already conquered one whole state. Eventually the pines get taller and closer to the road, boughs draped with snow. The three-lane highway whittles down to two somewhere on the other side of Lake George and, in the incubated comfort of car heat on high, you begin to wonder how the world was ever able to descend in full force on this rural, frosted paradise for the 1980 Winter Olympics. Yet twenty miles west, off the main highway that would otherwise carry you onto the Canadian border, Lake Placid accepted that honor, renewing itself with infrastructure and innovation to host the elite of athlete, media, and spectator.
Having not been to the Adirondack region since I was a kid and only vaguely able to recall watching the XXII Olympiad on a grainy television sometime around Valentine’s Day that year, I cobble together memories — deep snow, scratchy, patchy, hand-me-down snow pants. Frozen lakes devoured in a midnight snow dump, quickly cleared the next morning for rinks and skating ovals. Something about a country called the USSR…and a very important hockey game.
Forty years later. I stood in the rink where Coach Herb Brooks took his misfit team of skaters to the Gold Medal win. My 10 year old hockey player, center ice, under the banners Eruzione, Craig, Strobel. Legends. The history so palpable you half wonder if the old guy on the other side of the rink could be…
Essence: The intrinsic nature or indispensable quality of something that determines its character.
In Lake Placid you don’t have to look for its essence; its essence finds you. Its character becomes your character. A somewhat ridiculous dream state given that nothing else much has happened in the past four decades. But enough happened then that your very breath and presence connects you to the feats of human endurance, sacrifice, and talent embodied in those that walked here forty years ago. For a moment, even, you believe this was somehow your experience.
I suppose we at FH Perry Builder don’t have quite the same aura about our work but we hope that when you come into contact with us that our essence finds you. We actually think about it all the time. Not so much what it is but how it manifests in the same way that it did for me on my visit North. We want our essence to be so powerful that our job sites glow with optimism, our processes prioritize integrity, and in everything we do we are relentlessly creating the environment for others to make great things happen.
Lucky for us, we have accomplished a whole lot in the past forty years and only find ourselves expanding beyond the confines of our own “once great” definition. I suppose the names and the venues have changed a bit, but if you came into contact with us back then, part way through, or today we hope, at the very least, you can say our essence is just as strong as ever. That’s the thing about it; it’s indispensable. And so are you. So what is your essence?

Vacation? Cold Weather? We Can Help!

What Can We Do for You?